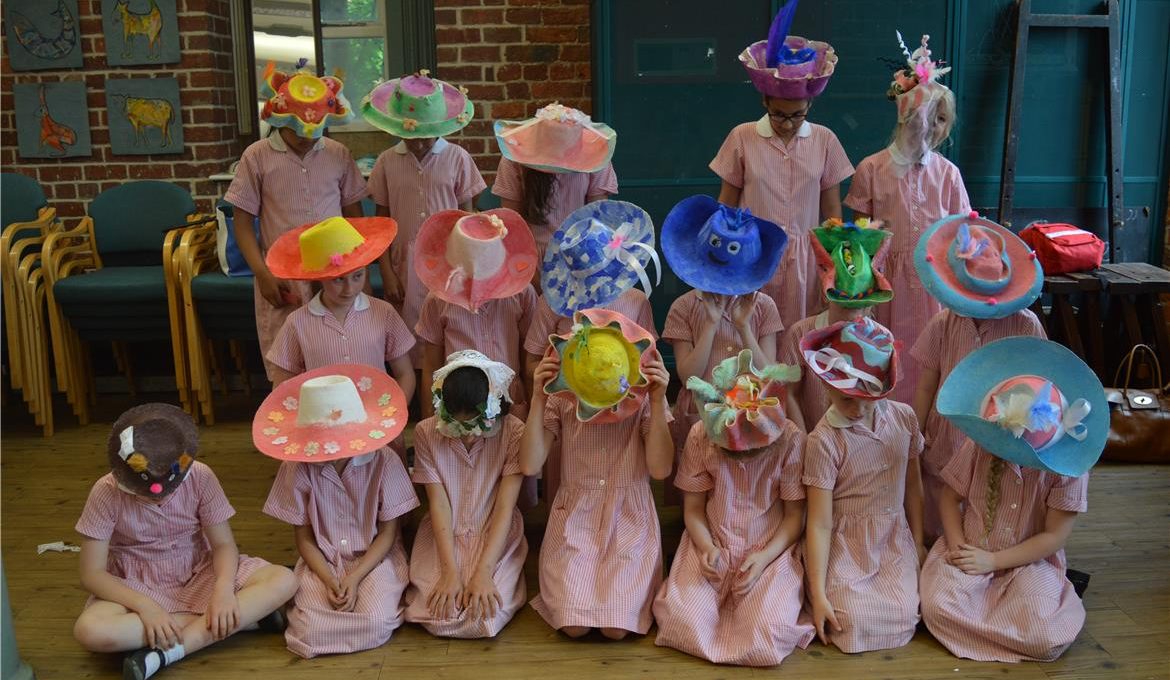 The Hat Works Museum is home to a recreated hat factory with some 20 fully restored working Victorian-style machines and a fantastic collection of over 400 hats from around the world. The museum is a hub of excellence, creativity and innovation for milliners, crafts-people, designer makers and those with a keen interest in haute couture fashion and cutting edge textile design.

Yesterday was amazing, we went to the Hat Works Museum.

On the way, everyone was squirming in their seats wondering what the experience was going to be like.

When we arrived we were split into our two classes and then taken on a tour around a section that had glass cases full of hats.  There were big hats, small hats, fun hats, religious hats, hats for special occasions and many more!  The man who led us around was called Carl and he gave us all a clipboard and pencil with a sheet inside that told us to find all sorts of different hats from different places.

Next we went to design and make a hat.  There were lots of different types, eg volcanoes, flowers, crowns and again many more.

After lunch we went on a tour around the factory and saw how they used to make hats.  They would rip the hair off an animal (depending what type of hat they wanted), separate the small bits of fur from the long bits then put some water on and mould it together.  Next they would dip it in boiling wee and mould it some more.

Lastly, before we went we finished decorating our hats.  My favourite hat was Rose’s pineapple hat.  It was a great day!
By Jessica H

This website uses cookies to improve your experience while you navigate through the website. Out of these, the cookies that are categorized as necessary are stored on your browser as they are essential for the working of basic functionalities of the website. We also use third-party cookies that help us analyze and understand how you use this website. These cookies will be stored in your browser only with your consent. You also have the option to opt-out of these cookies. But opting out of some of these cookies may affect your browsing experience.
Necessary Always Enabled

Performance cookies are used to understand and analyze the key performance indexes of the website which helps in delivering a better user experience for the visitors.

Analytical cookies are used to understand how visitors interact with the website. These cookies help provide information on metrics the number of visitors, bounce rate, traffic source, etc.

Advertisement cookies are used to provide visitors with relevant ads and marketing campaigns. These cookies track visitors across websites and collect information to provide customized ads.

Other uncategorized cookies are those that are being analyzed and have not been classified into a category as yet.