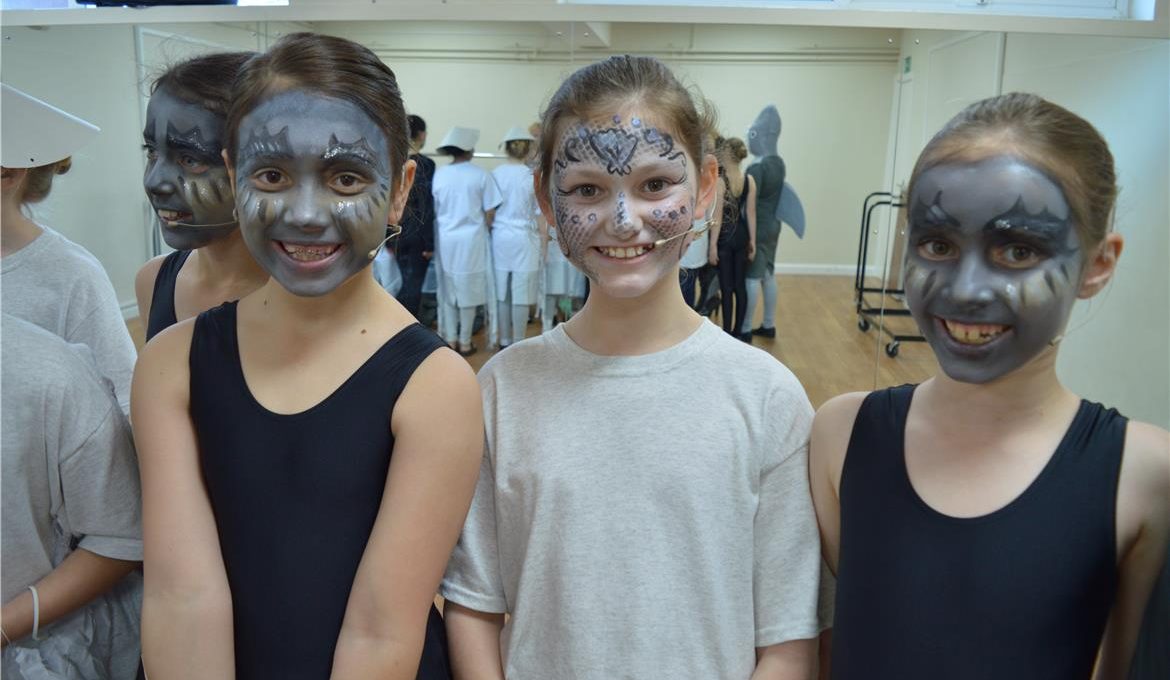 Thoughts from the cast….

The day of the performance had arrived. We quickly rushed into the dining room and put on our costumes. Then we had our makeup and face paint done. I was excited all the way through.   Jiya

Ocean Commotion was an excellent performance. It was fun with all the makeup, dresses and excitement. Then when we were on stage I felt excited and nervous.    Abirami

Ocean Commotion was an excellent experience. We were all as excited as a mad puppy who hadn’t seen you for weeks. As the day floated by everyone had butterflies in their tummy.    Bella

I was excited when we did the dance. When the play had finished I wanted to do it again. My favourite bit was the rap.    Milly

Herrings did a dance. My partner was Maddie. We had face paint and makeup. It was very exciting. I had butterflies in my tummy.   Lucy

When Mrs Paterson had told us that we were doing a Year 4 show called ‘Ocean Commotion’, my mind cast back to when I was in Reception. My Daddy took me to see it and I completely became interested right from the start.    India

Year 4 performed the production of Ocean Commotion and we were amazed at how well it went. Everyone is devastated that it’s over but glad that we did it. There were solo songs, duets and chorus songs and even the Great White Shark isn’t so glad that it’s all over. If you came to watch I hope you enjoyed it because we did.     Amy

At the start of the show I felt excited and a bit nervous. At the end I felt sad that it was over and I thought we did really well.   Olivia

Just before the show I was extremely excited, I had butterflies in my tummy. It was going to be amazing, the spotlights shining, the makeup twinkling.  Lotta

I knew that this is the moment I had always been waiting for. When we had all of the face paint, microphones and costumes I couldn’t control myself. I was as happy as a pig in a big patch of mud. I could absolutely not wait.    Neusha

Before the herrings dance I thought about the fish in ‘Finding Nemo’ to remember what the dance was like. I didn’t exactly need to because we had our own different dance. Beatrice was brilliant, Lottie was fab and Yasmin was amazing! When we did the herring dance, just looking at the smiling audience made me feel confident and happy.    Madeline

It was hard learning some of the songs but I managed okay. When the big day arrived I had loads of butterflies fluttering around I my tummy but when I swam on all my nerves went and I sang my heart out. After it was all over I felt a bid sad that it was done and dusted. One thing, I will never forget it. I shall cherish the memory that I was a little fish in the main school production.    Eliza

The moment came and it was time to go on stage. It was our time to shine. There was quite a big audience, so we had to break through the nerves. The show was absolutely brilliant. We were all proud of ourselves for what we had achieved. This was one moment I will never ever forget.     Beatrice

I was thrilled when I knew I was a pilot fish and I knew I was going to give everything I had into the play so I could remember it as the best play ever. It was tricky learning so many words and remembering long dances but I was getting better at the songs every time we practised.

It was amazing when we had sorted everything out but we always had something to work on. The sports hall looked wonderful once everything was decorated. On the day of the real play everyone was nervous. The dress rehearsal went well though.

When everyone was lining up backstage with lovely makeup and face paint it was very nerve wracking. Half way through the show I thought wow but at the end I was thrilled. I was so pleased with myself and everyone else for making the best show ever.    Matilda

The day had arrived and I was going to perform to the rest of the school. When we were performing I didn’t feel nervous one bit but when we had to perform in front of parents I was as nervous as a shipwreck! The makeup was amazing. I was a porpoise so I had to have shiny black mixed with iridescent powder which made it a silver colour. Before the show started we were waiting for the music in the dance studio. When I was out there I realised I was enjoying myself! When the show was finishing, we did our lift. After the show I felt like doing it again.    Eva

I was a Pilot Fish for Ocean Commotion. I had to clean and look after The Great White Shark, Beatrice.  And so did the other Pilot Fish Tilly. In all of the rehearsals, I felt brilliant but on the day of the show I felt nervous.      Zeny

It was the day when we were going to perform Ocean Commotion and my heart was pounding like thunder. It was going to be amazing. We were going to have makeup and microphones.   Imaan

At the end I felt very sad because it was over. I wished it would never end. It was wonderful and if we are ever doing it again – count me in!    Lexi

Before Ocean Commotion I was a bit nervous and a bit exited but I knew most of my friends were feeling the same as me so I just tried to calm down. After two songs I grew more confident and conquered my fears.   Nancy