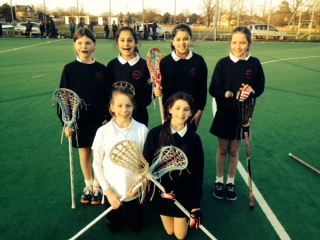 On Tuesday 10th March, the Year 6A and 5/6B lacrosse teams played in the last lacrosse tournament of the season at Timperley.

All the girls showed how much progress they had made since the beginning of the season, and the A team played their best lacrosse, showing fantastic team spirit, drive and determination, scoring an impressive 18 goals! The A team beat Withington Girls’ School 8–0, Bollin 2–0, St. Hugh’s 4–0 and Willows 4–0. They narrowly lost 0–1 in a closely fought match against Well Green, and lost 0–3 to St Vincent’s. They came 3rd overall and Mrs Baxter was extremely proud of their fantastic achievements.

The B team consisted of two Year 6 and four Year 5 girls, and they had a tough section consisting of all A teams. They came 6th overall and their best game was against Navigation School, when they won 2–0. Jess scored 4 goals and Rosa scored 1. The B team was thrilled to be awarded the ‘Team Spirit’ trophy, which was well deserved.

Congratulations to all our girls!